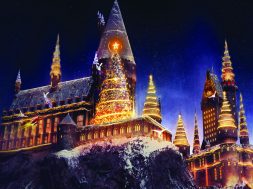 Nearly four months ago, Universal made an exciting – if not entirely surprising – announcement: it was going to import the Christmas in The Wizarding World of Harry Potter celebration that had been just announced for Universal Orlando Resort for this upcoming holiday season. Since then, the company has been mum on the exact details for the celebration, but just today it decided to lift the yuletide curtain a little bit more, unveiling not only more magical details on the wizarding Christmas, but also revealing a small little fact: Universal Studios Hollywood will have its biggest-ever program of holiday experiences yet.

Let’s jump right into all the wondrous details, shall we?

Christmas in The Wizarding World of Harry Potter

Beginning Friday, November 24, 2017 and ending Sunday, January 7, 2018, The Wizarding World of Harry Potter will be transformed into a teeming winter wonderland.

The village of Hogsmeade will be festooned with “all-new, custom-made” ornaments, designed exclusively for each of the theme park land’s various storefronts; expect to see the crests and mascots of the four Hogwarts houses (which were also celebrated in this past summer’s Nighttime Lights at Hogwarts Castle), along with magical tree toppers and, of course, Hogwarts Castle snow globes. Punctuating the décor will be seasonal dishes and beverages – including, yes, the return of hot Butterbeer – and a new lineup of songs for the Frog Choir, which will include a range of Christmas carols (some, it sounds like, that will be newly-written).

But the real highlight here, of course, is the brand-new projection show, The Magic of Christmas at Hogwarts Castle. Only the second such projection-mapping performance to exist at Universal Studios Hollywood (and the third across all three Hogsmeades all around the world), this dazzling display will, according to Universal, “illuminate Hogwarts School of Witchcraft and Wizardry with colorful imagery and impressive dimensional animations that dance across Hogwarts Castle in tandem to a musical arrangement from the Harry Potter movies.”

What would the holiday season be without a little Grinchmas? The program returns for yet another appearance at Universal Studios Hollywood, featuring the classic 60-foot Grinchmas tree, musical performances by Martha May Who-vier and the Who-liday Singers (a “hip-hop boy band ensemble” that will perform a cappella renditions of both traditional and pop-rock holiday songs), and, of course, appearances by none other than the Grinch himself.

Grinchmas will take place on the first two weekends of December and then occur daily from the 15th on through the end of the month.

The best of the rest

If that still isn’t enough yuletide excitement for you, Universal has several further experiences situated all throughout the rest of the park and on into CityWalk, as well.

First up: Despicable Me: Minion Mayhem and its next-door Super Silly Fun Land area will be getting their own specific set of decorations – including holiday-clad Minions who will be more than eager to spread Christmas cheer (which sounds both exciting and vaguely threatening).

CityWalk’s 5 Towers Plaza will be graced by a 40-foot-tall Christmas tree of its own that will have all 200,000 of its LED icicles synchronized to the surrounding lights and music. The plaza will also be seeing more than its fair share of visitors: street performers and free concerts will keep the area extra festive, while, at night, Santa Claus himself will be making daily appearances in a special meet-‘n-greet.

And the nearby dancing water fountain, which has already been called an attraction unto itself (with its 230 individual power jets), will be upgraded for the season, getting a new choreography, lighting, and holiday music package.

The Christmas celebrations at CityWalk begin on Black Friday (that’s November 24 to the rest of the world) and will transpire on through Christmas Eve eve, Sunday, Decmeber 23. 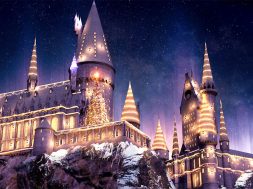 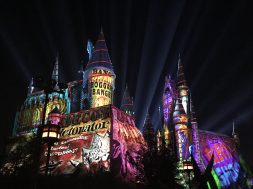