Location
On the Wizarding World’s outdoor stage at the far end of Hogsmeade.

The Bottom Line
The Hogwarts Student Frog Choir presents several musical numbers based on hits from the Wizarding World, including “Double Trouble.” Musical frogs accompany students from each of the Hogwarts houses (Gryffindor, Ravenclaw, Hufflepuff and Slytherin).

During Christmas in The Wizarding World of Harry Potter, the Frog Choir sings four new songs in spirit of the holiday season. 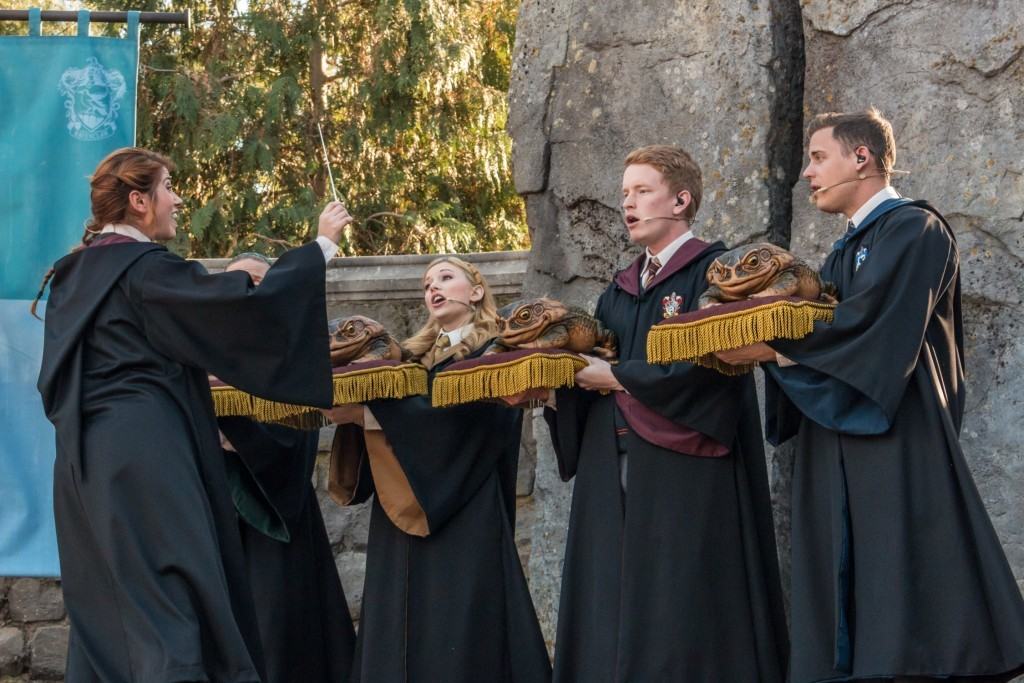 Intensity Factor
Barring a fear of frogs, the Frog Choir is in no way intimidating and appropriate for all ages.

Crowd Patterns & Wait Times
The Frog Choir performs several times throughout the day and usually attracts a healthy audience. There is almost never a scenario in which you can’t view the performance. The stage is rather small, so if you’d really like a close look, hang out near the performance area before a show begins. Keep in mind the performance area is standing room only, though guests nearest the stage often sit down on the ground.

What to Know Before You Go
Universal does currently publish showtimes for the Frog Choir. Ask a stage attendant when the troupe is scheduled to perform, or access USHWaitTimes.com, under the performances tab. Additionally, the Frog Choir will pose for photos following the performance. If you’d prefer not to wait long for a photo, stand near the right of the stage to be among the first in line. Finally, note that knowledge of the Wizarding World is not necessary to enjoy the talented performers. However, you may recognize several songs from the Harry Potter films.